A review of Dr Debbie Cannon's magnificent play about Lady Bertilak and her love for Sir Gawain - as seen from the point of view of The
84 views0 comments
Michael Smith, Mythical Britain 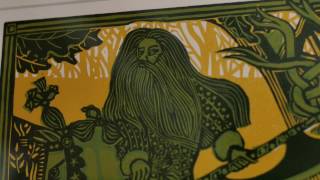 Help bring Sir Gawain and the Green Knight to a new audience!

Sir Gawain and the Green Knight - recreating in linocut the characters of Cotton Nero A.x

Background In a glass case in the British Library in London can be found one of the true gems of English literature, a book now known as Sir Gawain and the Green Knight and once part of a collection of the antiquarian and bibliophile, Sir Robert Bruce Cotton, MP. Cotton collected his library of ancient texts in the late 16th and early 17th century; his foresight was to preserve a corpus of literature which by 1757 was acquired by the Kingdom of Great Britain to become the ba
88 views0 comments